Today I am incredibly proud to be supporting the launch of the 5FU Test Alliance support group. They comprise a small band of brave people who have either lost a loved one or suffered toxic events themselves, as a result of DPYD deficiency. You can find more about this condition at www.5futestalliance.org.

I am the market director at Oxford Cancer Biomarkers and today I’ve been in a London recording studio listening to Professor David Kerr and Louise Brown talk to various national news outlets about the launch of the 5FU Test Alliance. Although marketing can appear glamorous, this sort of day is very unusual and I enjoyed it. 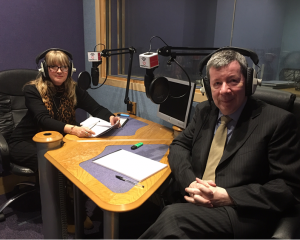 The 5FU Test Alliance launch and the stories of Lynn, Keith and Ann will be broadcast on several media outlets today, including @BBC South Today, @SkyNews, @JackFM, @Heart. This is not a normal day in marketing but it is a good one and supporting a fabulous cause; helping to save lives.

Professor Kerr’s team developed the ToxNav test from their research at Oxford University Hospital and it comprises many more SNPs (single nucleotide polymorphisms) than other available tests. ToxNav looks for 20 SNPs including the 4 common ones found in other tests but additionally 2 further SNPs associated with very serious toxicity and risk of death. One of these is much more common in people of African heritage. Two others uniquely code for a common and debilitating condition called Hand Foot Syndrome or HFS for short.

A SNPs is essentially a ‘fault’ in a gene; in this case on the DPYD gene. People with one, or sometimes more, of these ‘faults’ can develop life threatening toxicities when exposed to fluoropyrimidine based chemotherapy; called 5FU in intravenous form and capecitabine in oral form. This chemotherapy is used to treat many common cancers, particularly colorectal cancers, hence Professor Kerr’s academic interest in the subject. 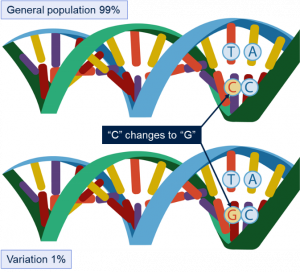 graphic represents a SNP or fault in the gene responsible for producing the enzymes that help metabolise fluoropyrimidines.

Professor Kerr and his colleagues believe that there are up to 30-40 SNPs in human populations that represent the range of ‘faults’ on the DPYD gene. OCB’s ToxNav has 20 of these SNPs compared to 4 or 5 in other tests.

Louise’s father Keith Gadd, passed away a month after taking capecitabine for a successfully removed bowel tumour. He died in a traumatic fashion after weeks in intensive care and the family have still not recovered from the ordeal. I find Louise’s bravery in telling his story again and again to the press so moving. You can see Keith’s story on a video here.

PREVIOUSOCB are presenting today with IBM at Pharmatec19 - London Room 7 at 11:20: Using AI Technology To Improve Outcomes For Cancer Patients
NEXT

Colorectal cancer in the Covid-19 era