Words And How To Care For Them 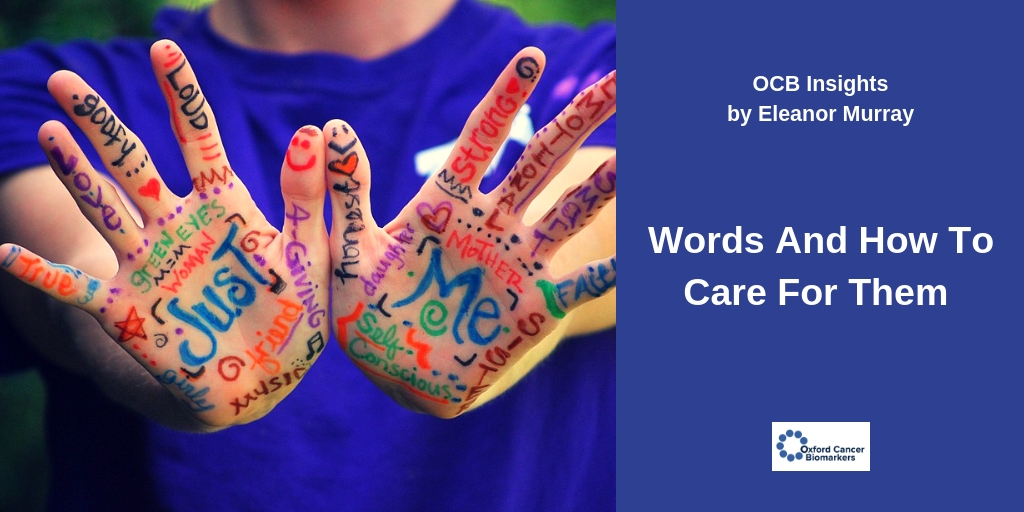 Cancer is a word charged with negative emotion. Hence the “Big C” or “C word”. As though by avoiding saying it out loud we can mitigate the emotional triggers and navigate around the anxiety and sadness the disease can imply.

In both medical and non-medical communities, the word cancer is powerful and intimidating for all of us. Last year I saw an old friend who had been diagnosed with Lymphoma but who, after massive weight loss and grueling treatment had been told he was finally in remission. He now looked well. He was beaming, laughing and joking and seemed fully back to his old self. “How are you? How’s your health?” I asked when I got a moment alone with him. I thought I was choosing my words sensitively, He was visibly irritated “Do you mean the cancer? You can say it, you know.” It suddenly dawned on me how tiresome it must be to hear those close to you avoiding the word that has been such a large and traumatic reality in your life. To be reminded that others find your illness unsayable when you have had to endure it and the harsh treatments. I apologised and he was, of course, understanding. For him, the use of euphemism was a mark of my fear and a reminder of the gulf between those who’ve experienced serious illness and the rest.

Medics talk of “invasive tumours”. Obituaries praise the dead for their “brave fight” or the (lost) “battle to conquer” the disease. The journalist and broadcaster John Diamond who died of throat cancer in 2001 famously criticised the military metaphors that are so often employed when describing the lived experience of cancer. In his book ‘C: Because Cowards Get Cancer Too’ Diamond writes: “I despise the set of warlike metaphors that so many apply to cancer. My antipathy has nothing to do with pacifism and everything to do with a hatred for the sort of morality which says that only those who fight hard against their cancer survive it or deserve to survive it – the corollary being that those who lose the fight deserved to do so.” We are so used to hearing of cancer patients ‘fighting a battle’ that we may use these expressions without considering their impact on patients.

As part of my medical studies, I had the opportunity to spend time with a patient that had been severely disabled by illness. Having previously been a totally independent woman, not used to relying on others, she described to me with some emotion the pain and difficulty she had adjusting to her new life. She looked at me meaningfully and said, “they wanted me to use a hoist.” Whatever she was trying to communicate hadn’t connected. “Yes – for getting in and out of bed?” I asked. “A hoist,” she said with even greater emphasis, looking at me gravely. Then it dawned on me. This patient was the daughter of a steel-worker. To her, a hoist is a piece of industrial equipment used to move things not people. She felt dehumanised. “I am not a sack of coal,” she said – looking at the ground.

It’s important not to underestimate the clinical importance of language. When I arrived at medical school we were encouraged to discuss our greatest fear for the coming five years. I said that mine was saying the wrong thing at the wrong time and hurting someone. It was true – I was terrified. It meant that I spent a lot of time sitting by beds listening rather than doing any talking. I focussed on my body language and had a few key phrases that I’d repeat to try and show that I understood what they were telling me. “I’m so sorry to hear that.” “That must have been very upsetting.” “I can see that this must be a very difficult time.” Inevitably, I sounded stiff and unfeeling. I persisted and gradually grew more comfortable with patients. I still often have no idea what to say and sometimes talking about death and illness makes me dig my nails into the palm of my hand. But I’m trying. I have to try. When in doubt, I have learned, leave it out but above all listen and be guided by the truth. Cancer patients need to trust the professionals not just to be kind but to be honest.

In communication – as healthcare workers, as family members, as colleagues, as friends – words are our primary tool. In many cases, they are all we have. The processes of treatment can be brutal and, in order to achieve the necessary efficiency, can feel impersonal. To me, a patient once described a feeling of sitting on a factory conveyor belt waiting for what was coming next. After surgery is over and the wounds are healing after radiotherapy is finished and after chemo has been prescribed what remains is to protect the dignity of the patient. For this, careful use of language is an indispensable part of patient care.

PREVIOUSWhy Do Some People Get Chemotherapy Side Effects While Others Don't?
NEXT