Rebecca survived the toxic effects of 5-FU against the odds. This is her story, in her words.

We are grateful to Rebecca for writing this and for her participation in the continuous improvement in our ToxNav® panel. She is an inspirational young woman and we salute her tenacity, please read and share to encourage others to seek help and advice.

Nobody thinks it will be them that hears the words “you’ve got cancer”.  For me I heard them at thirty and three-quarters.  In some ways it was a relief, it was an answer to the increasing pain, bleeding and diarrhoea that I had experienced for the last few months.  Months where my symptoms worsened but I just put it down to my ulcerative colitis that I had suffered from for years.  After three admissions to hospital and a CT scan I had my diagnosis of stage 3 bowel cancer confirmed and was booked in for surgery to remove the tumours and as much of my colon as required, to leave me cancer free. 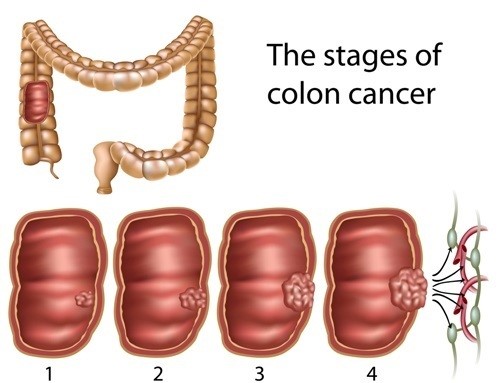 After the initial shock and fear, I counted down the days until my operation with a weird sense of eagerness.  I knew that I would be having an ileostomy- where the end of the small intestine is brought out through the abdomen, creating a stoma.  Waste then passes through this to be collected in a bag, stuck to the outside of the tummy.  Many patients and doctors will, understandably, do all they can to avoid having to have a stoma; some patients can have a temporary stoma that can then be reversed at a later date with another operation.

For me, the stoma was a huge blessing, I was going to be able to get ‘my life back’ after having to plan everyday around toilets for too many years. 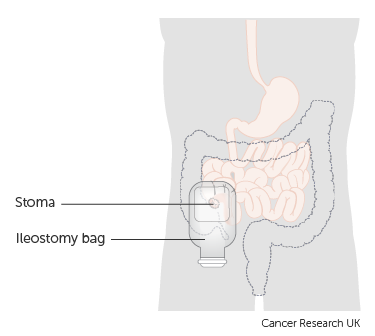 The morning of the surgery arrived and I signed the various forms needed to give my consent.  My surgeons had hoped to be able to perform key-hole surgery but unfortunately (although it really doesn’t bother me), the tumours were too large and I ended up with an 18cm scar after a pan-proctocolectomy, the removal of my entire colon, meaning that a reversal would not be possible in future.  My family met me in surgical recovery, terrified and in agony.  Various complications post-op, including ileus bowel, where the small intestine ‘shuts down’ because it does not like being handled meant I was unable to eat for ten days.  With the added complication of my small intestine having not adapted to its new role of absorption, in place of the colon, any calories I got from ‘clear fluids’, didn’t help me gain much needed weight; leaving me losing weight and weighing just 43kg.  After two weeks and two days post-op in hospital I was sent home to rest, recover and put as much weight on as possible (easier said than done in the circumstances), before starting adjuvant chemotherapy.

In the five weeks at home, I managed to gain 4kg and gradually rebuilt my strength to be able to walk about a kilometre.  I returned to hospital for my pre-chemo consultations and started fluorouracil-based chemo (5FU) on Wednesday 24th May 2017.  This is where I have to depend on other people for what happened.

The morning after my chemo I had a seizure induced by the medication and was taken into A & E Resus by ambulance, 24 hours later I had a second seizure on the ward, followed by a series of four cardiac arrests. 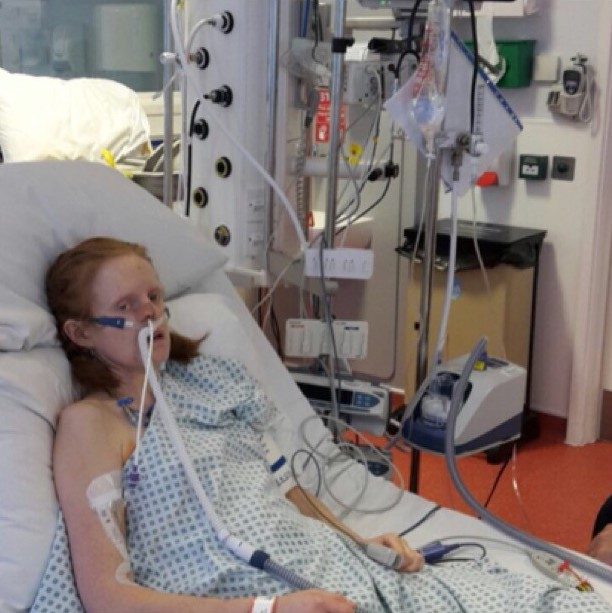 I was taken to the Intensive Care Unit by the duty crash team and my family were told that they were doing all they could to stabilise me but that the prognosis wasn’t good.  I was sedated for three days before being woken.  After a further two more days in ITU, I was moved to the High Dependency Unit for 48 hours.  I was then moved back to a ward and ten days later I was discharged from hospital.

Waking in Intensive Care, I had no idea where I was, what had happened and thought that my family were joking when they said I was back in hospital.  My memory had been wiped completely, like waking up and not having a clue what day it is, but this time I didn’t have a clue about anything.  I had forgotten about my cancer diagnosis, surgery and ileostomy; telling my family how rude it was of the doctors to not tell me I had cancer!  It wasn’t until a few days later, when I was a bit more ‘with it’ that cardiac arrests started to be mentioned but I couldn’t understand it, or believe it!  My family had lived in hell for fifty-six hours, not knowing if their sister and daughter would survive and if I did, what brain damage I might be left with.  As though they hadn’t had enough to put up with already!  We were all back to ‘square one’ although I think it felt more like minus one at the time!

I have always loved sport and when I was in ITU, I hoped that I could walk/ jog 5km within a year.  I kept this dream to myself as I thought everybody would think I was bonkers if I’d told them!  I started walking- less than 50 metres, once a day at first!  And very slowly increased the distance until I walked my first kilometre in September 2017.  I started swimming and cycling post-op in August 2017 and jogged my first kilometre in the November. 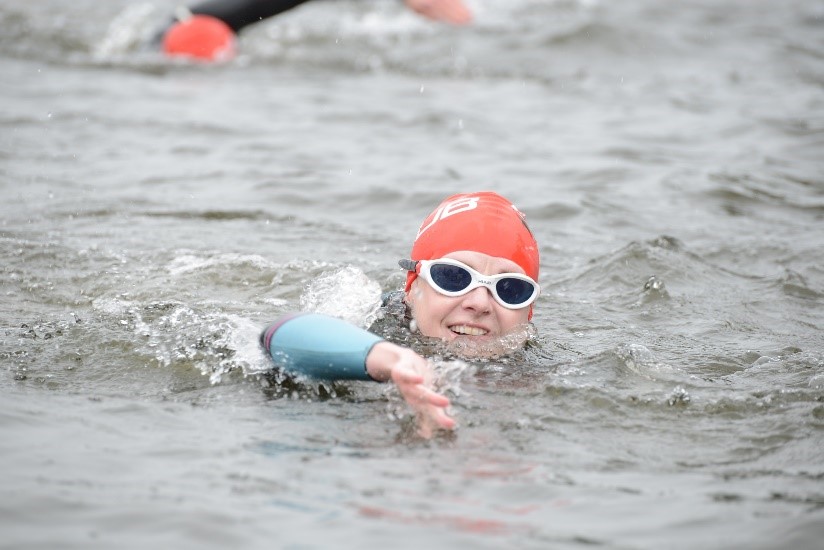 I gradually built up all the distances and entered my first Sprint distance triathlon for 1st April 2018, three days before the first anniversary of my surgery. Five months later, I completed the unimaginable life dream of a half marathon, something that I had always wanted to try but was not able to before my surgery because of the colitis.  My stoma allowed me to finish the 13.1-mile event, and despite being completely exhausted, mentally and physically, I was over the moon to have taken on and achieved such a big goal!

I had hit rock bottom mentally and physically after ‘losing everything’ I had.  Using sport not only helped my physical recovery but it also boosted me mentally.  I felt that I was achieving something, despite being unable to work, drive and perform normal day to day tasks.  There is an increasing amount of evidence to show the benefits of exercise in cancer patients, which was a bonus!  For me, sport is an escape, I forget about my cancer diagnosis, hospital appointments and my stoma, I feel free! 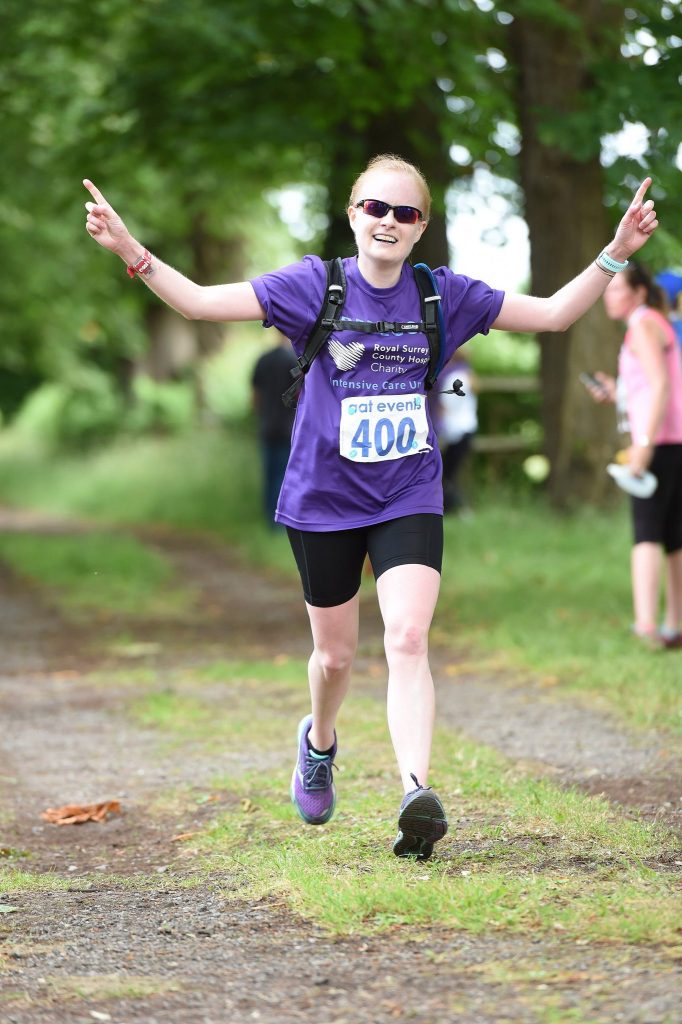 I am fully aware that the chances of me surviving were slim; if I had been at home, despite any attempt by my family to perform CPR, I would not be here today, that doesn’t bother me.  But my family would be without a daughter and sister, who died, not as a result of the cancer but as a result of the treatment.  Something that could have potentially been avoided if I had had a simple blood test, not available at the time to check for DPYD enzyme deficiency.  A test that would have shown risk factors, and a different chemotherapy regime would have been given.

I am lucky, I survived, but preventable deaths are occurring, and I will do all I can to help Oxford Cancer Biomarkers in their research to identify genes and variants responsible for 5FU and capecitabine cardiac toxicity to prevent similar cases from happening in the future.