Kat’s Story: When The Doctor Becomes The Cancer Patient

We’re grateful to Kat Goodall for sharing her story with us. Kat is a General Surgical Registrar from Queensland, Australia, who was diagnosed with bowel cancer earlier this year.

This is Kat’s story. 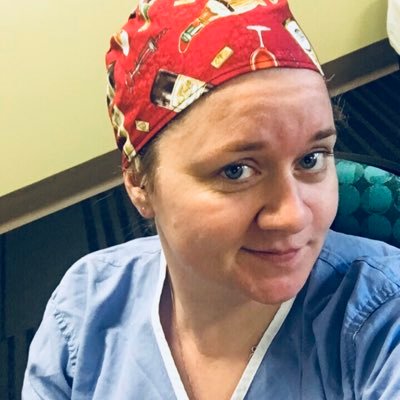 I’m Kat, a 34-year-old woman living in Australia. Like a small (although increasing) number of young adults, I was diagnosed with bowel cancer. I was 33 at diagnosis.

April 2018 is still the worst month of my life.  I think this feeling is echoed by my partner and family.

My diagnosis was a huge advertisement for my work colleagues to get themselves looked at. You see, usually, I am the one on the other side of the diagnosis. The one giving the news.

I’ve had my hands on many colonoscopes and seen many other people’s cancers. You see, I work as a surgical trainee. I’ve spent my hard years at medical school, junior doctoring and then at diagnosis, the end was in sight. I was a year out of sitting my final hurdle exam- to become a consultant surgeon. I even had my eye on colorectal surgery as a specialty. Being told that now I, the 33-year-old surgical trainee had cancer myself, meant that everything I had worked for was suddenly on hold. I have told myself that this entire time. Not lost, but only on hold.

Life changed that day. In some ways for the better. Any cancer patient will tell you that after diagnosis nothing it the same. Some parts of your life resemble what you knew, and others are completely different.

In the blink of an eye, my partner moved in with me, I had an Anterior resection and following this had to access IVF to store embryos as even at my age, I hadn’t even thought about family. I was too busy enjoying my life, my work and having fun day today. I never really made plans as my life revolved around training. I was staged as stage 3. It’s an odd position to be in. Not metastatic so you are pushing so hard and hoping for a cure, but not as reassuring as stage 1 or 2 cancers.

For better or worse I knew too much. I knew the figures, the chemotherapy regime, the operation. I’ve even performed it myself. Swift staging and an absolute trust in my doctors, nurses and care providers is the only way you can move forward in such a situation. I had to focus on only the next hurdle. Any more than that becomes too overwhelming. You aren’t just searching ‘Dr Google’, you are accessing the same journals that your doctors are reading.

I was determined. I’m nowhere near done. My parents and partner probably took the news the worst. They, plus many others in my life have been the reason I managed to get through. It was ‘easy’ to start with. The surgery went well, I recovered quickly. The IVF was a roller-coaster of emotion packed into 3 weeks with only one attempt allowed due to the time frame needed to start chemotherapy.

I have made a list of the side effects I got, and it is many more than this. I’ve come to realise that it’s not the effect or a quantitative number of anything but it’s the quality of it all that counts.

‘Some gastrointestinal upset’ is quite different to crying on the floor of the shower rotating each buttock on the cold ground as you can’t sit straight on your backside due to pain.

It’s racking up neurological symptoms and hypersensitivity to the point where you get worried you’ll never be the same.

The truth is, you won’t be.

By far the worst side effect I got was plantar-palmar erythrodysesthesia, or hand foot syndrome. It was mentioned as more likely if I chose the CAPOX regime. I chose 6 months of FOLFOX. Fluorouracil (5-FU) was the culprit. I had awful symptoms from the oxaliplatin and stopped this at cycle 7.

Sooo plantar palmar erythrodysesthesia sucks the big one- so much pain… but how great are my nails looking ???? #folfox #chemotherapy pic.twitter.com/RzG24ksaib

Overlapping days were cold- induced parathesias and what I liked to call ‘fire hands’ from the 5-FU. One needed warmth to treat, the other needed cold. I had the 2 side effects at the same time. This was really difficult. MY HFS started mildly at cycle 4 and peaked at cycle 8. I had reached a point where I actually couldn’t walk and when the 48 hr infusion was due to be disconnected I required a wheelchair to attend appointments. This was, in my eyes, defeat. I found it very difficult to not be in control. It was so severe I couldn’t use my hands even to flex fingertips. I would be sleeping holding ice packs for 4- 5 nights in the fortnight. I couldn’t shower, dress, go to the bathroom, make food or do anything by myself.

This is what I mean by qualifying side effects. Inability to achieve the simplest tasks is incredibly depressing. We tried medications, creams, infusions and anything we could think of. Sitting feet and hands in cold water was in the end, the only reprieve. When you had to take them out, the pain hit. It was inevitable despite all I could do. I was also determined not to decrease doses. I was so determined to have as much chemotherapy as I was intended to have. I cannot fathom the idea of regret. By cycle 11 I was crying again and not wanting the pain of the HFS anymore. We made it to cycle 12. I only had 1 delay- cycle 5 due to low platelets. I was, thankfully, never neutropaenic.

My partner soldiered on. He has not once complained. Our relationship is stronger. I no longer stress about the little things. I said earlier that you are not the same after something like this. How can you be? I went head on into treatment wanting to gain more than my life out of the experience. I wanted to come out a little better of a person that when I went in. I celebrated each cycle with activities. This has made some amazing memories. I documented everything with photos and did things with the people that mattered the most to me. I never went to chemotherapy alone and for this I am grateful.

Cycle 6 reward. Spoiled ourselves with a beautiful meal in Townsville. Joined by Col and Tracey. Both mean a lot to Ken and I. #folfoxcountdown #bowelcancer pic.twitter.com/p3oGLvQVAT

I find now that I have more time for anyone, any problem small or big. I have clarity and appreciation for what really matters. I have been able to do small trips, see friends and attend weddings and birthdays. I’ve been there for my best friend when she had her first baby. These things would have not happened if I was still in training. My (rude) interruption to life and training has given me some things that I would have missed out on.

I am now post-treatment and about to have my scans and bloods. This will be a lifetime of screening for me. I only hope all I’ve been through has bought me the time I want, the time that feels like it was going to be so easily stolen.

If you’ve read this far, thanks for reading. I’ve been through what I call ‘chemohell’ and I wouldn’t wish this whole experience on anyone. I had no factors to make me more likely to get bowel cancer. I was just unlucky. I now call myself the luckiest unlucky person as so many things, despite the diagnosis, then went in my favour. I urge anyone who has vague symptoms, and anyone who qualifies for screening to just do it. It’s worth your life. For you, family and friends. For those supporting people through treatment, thank you. You people are the reason we can carry on.

PREVIOUSCracking the Cancer Code: The Benefits of Personalised Medicine
NEXT

What Are Biomarkers And Why Are They Important In Cancer Care?